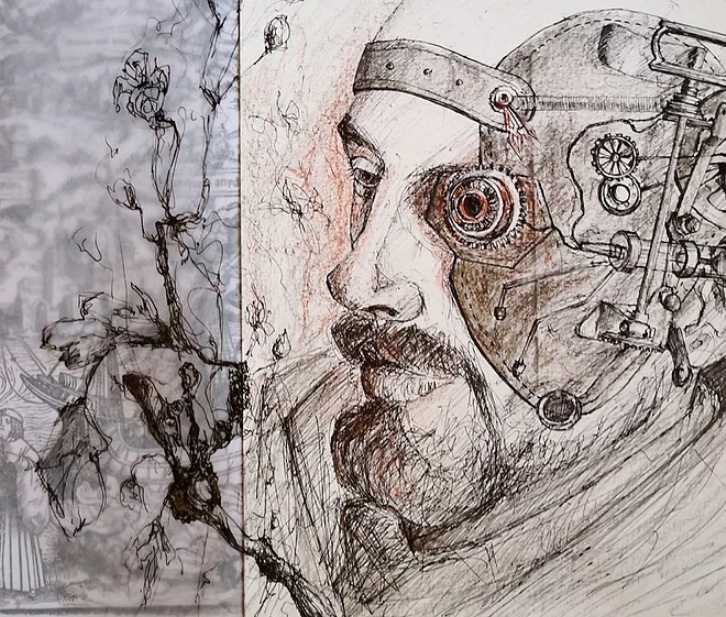 Our ability to transform everyday mechanical objects, to merge them with our own bodies, may seem surprisingly paradoxical, but it is one of our many talents.

Steampunk is an aesthetic trend born in the 80s. It is inspired by the Victorian era and generally highlights the energy of steam engines rather than advanced technology. Fans of this trend identify themselves as “steamers. »

It’s not just a lifestyle, with fashion accessories worked, combining the past and the future with the present. It is also a political recognition of the humanoid experience.

Steampunk is an ideological concept that leads steamers to imagine and create the unconventional. The assembly of parts and their combination with the body creates a unique bond that unlocks the doors of the human spirit and all its complexity.

Linking the body and machines to create and rebuild is now considered state-of-the-art technology. The “steamers” although anarchist in their own way, play a major role in the reinvention of our body by exposing it artistically and socially.

Steampunk culture revolves around a community of steamers inspired by the literary works of the English writer HG Wells, who supports the political concept of Steampunk or the French author Jules Vernes, involving the imagination of highly detailed technologies.

Ernst Junger defined the concept beautifully. “There is nothing more to expect from society or the state,” he said. Salvation is in the individual. L[1]ike Nero, the main character in Jules Vernes’ famous work, Steampunk is not only celebrated through an artistic style. It is also a rejection of our present society, which is based on human and technological principles, thus shaping useful fiction and the identity of a futuristic vision.

Inspired by the era of the industrial revolution, this neo-British underground art and cultural movement, based on crafts and its mechanical machines, is developing all over the world.

[1] Steaming into a Victorian Future: A Steampunk Anthology Paperback – February 6, 2014

“I know Steampunk culture (but less “steamers”) Being Nantes at heart, the world of Jules Verne with his fantastic “20 environments under the seas” and his adaptation to the cinema of 1954 is a fundamental cradle!

I have a deep admiration, a great respect for the draughtsmen and painters who work in the Art of Surrealist Figurism.

have conceptualized and singled out my work as a self-taught photographer (with my alchemist back and forth between film and digital).

I am fascinated by the apocalyptic post, the fusion of the Man-Machine, the Humanoid experience referred to by Sarah N.

But also the idea of Ernst Junger “there is nothing more to expect from society or from the state. Salvation is in the individual…

Finally, through some of your artists whose Steampunk culture is present, thanks to the claims of the DF Art Project and your figurative Destructuralism!

(to which I obviously agree.)

It is through your choices of unconventional artists represented, and your actions that I will present you with a file as a member.”

“It’s very interesting, my work is often brought together with Steampunk and there are indeed commonalities in the process. I find myself in the assemblage of everyday objects, the importance of aesthetics and detail but I can not hang on to it, probably because I have trouble with labels in general but also because my work is closer to the expression of a sensitivity than the humanoid experience, a dreamlike universe or even surreal more than a representation of an industrial era.

But still it is that your article is particularly well done and identifies the subject well!