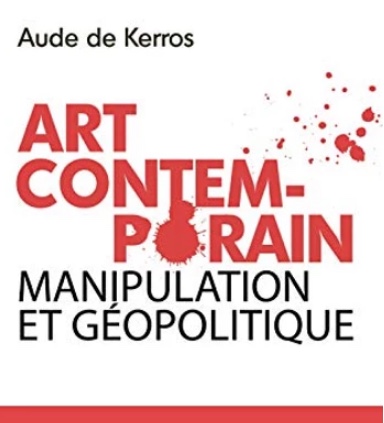 Towards Multipolarity in Contemporary Art.

With her new essay, Aude de Kerros presents her hypotheses concerning the evolution of links between contemporary art, hegemonic ambition and cultural soft power. Her analysis deals with the progression from one dominant artistic paradigm to the next – the shift towards abstraction, conceptual art and then, over the course of the last decade, the progressive emergence of a cohabitation between movements, underscored by a return of the figurative and a renewed preoccupation with aesthetics.

La Nouvelle Géopolitique de l’Art Contemporain (The New Geopolitics of Contemporary Art) is typified by its ambition: to retrace the geopolitical role of art from around 1917 to the present day. Such an approach is a mighty task given the multiplicity of political and cultural contexts spanning the era under research. Aude de Kerros manages to establish several guiding principles which support her outlook, stating that the period spanning from 1970-2010 was dominated by the conceptual trends of contemporary art. These are said to stem from a process aiming to establish uniform, worldwide art, which found its origins in the utopia of the early 20th century artistic avant-garde.

Continuity with Art from Days Gone by

Though a great number of elements put forward by Aude de Kerros may be verified, such as the promotion of abstract expressionism by the United States to achieve geopolitical objectives, one may decry the lack of rigour she applies to her arguments. In effect, all too often, the author asserts certain points without clearly listing her sources and it is sometimes difficult to follow the progression of her ideas. Methodologically, she combines historical facts, financial mechanisms and current events, without always explicitly referring to the links between them, and this pays a disservice to the points which are made. Furthermore, the style employed, almost colloquial, is also punctuated with numerous exclamation marks, and this cheapens the overall discourse. This discourse in itself, suffers from aesthetic judgement – contemporary art is perceived as a corruption. On the contrary, art founded on the accomplishment of form is seen as more legitimate and may have resurfaced in symmetry with the end of the artistic hegemony exerted by the United States. This art traces its lineage back to art of days gone by, art which has been ostracized by a more conceptual approach.

A Question of Aesthetics

Though it is easy to understand, due to the implications of the text, that (conceptual) contemporary art has dominated the market and the art world, it is hard for us to pinpoint the artists the author is referring to. Is she speaking of Jeff Koons, Gerhard Richter or artists from the minimalist movement? Aude de Kerros quotes Koons, McCarthy, Murakami, Ai Weiwei and Boltanski, for example, yet she is wrong in judging that there is no aesthetic value to their work. Certain artists explore the aesthetics of kitsch whereas others tackle austerity, provocation or the role of memory.

However, we do share the author’s thesis when she asserts that these artists contributed to promoting new media and that painting, drawing and sculpture have subsequently been devalued. They dominated the art world from 1970-2010, concentrating and benefitting from financial speculation based on their activity. In the 2010s, the tide seemed to turn. Emerging countries and superpowers shook up the world of art thanks to the emergence of collectors who knew how to detect the qualities of other movements.

Therefore, if we take China as an example, an increase in power could be accompanied by the emergence of an interest in traditional techniques. A cohabitation between conceptual contemporary art and art based on sketching and contour, could, for example, be explained by the predominance of images and symbols in Asian culture. The most obvious example of this would be written script. In East Asia as a whole, we see similar artistic approaches coalesce, a phenomenon the author defines using the expression East Asian cultural basin. Because of the economic power of the region and the interdependence of art markets, Chinese artists such as Chen Yifei and Zhou Chunya, radiate over markets and have fostered a rise in kindred spirits. Ink drawings, a typically traditional technique, are thereby used by Cui Ruzhuo and in the experimental approaches of the “alter modern” wave, a trend also called “post-deconstruction”. Other analogue situations throughout the world seem to support the way in which the art world has been set in motion. In this way, we can also list the growing recognition of Artists from African countries and highly diverse situations in South America.

Towards a more Immediate Sensation

Technical virtuosity, the contemplation that more traditional media may encourage (painting, sculpture, drawing and photography), the capacity to last without being accomplished through form – these are as many calling cards which make a case for re-evaluating the figurative. Conceptual trends, those which centralize a discourse more habitually left at the periphery of works, must now make room for works more anchored in the immediacy of sensation, works that can be appreciated without the crutches of a textual explanation, though the latter can be a precious aide, as always. With the Nouvelle Géopolitique de l’Art Contemporain, Aude de Kerros is brave enough to pinpoint the artistic renewal currently underway.